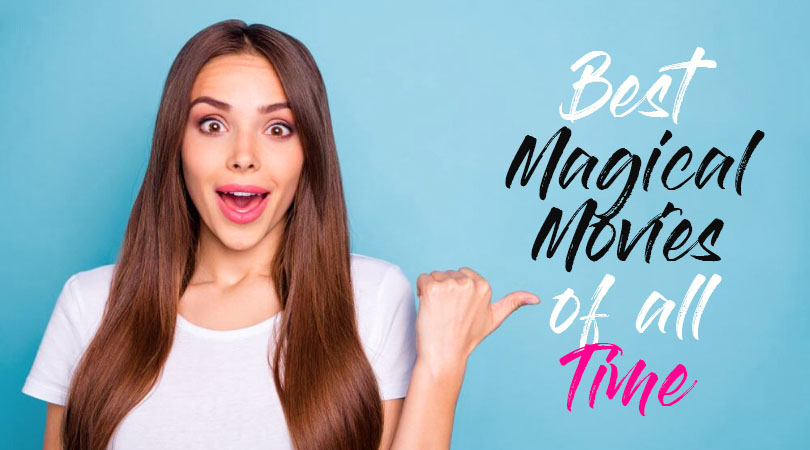 Fantasy and the magics are creating a unique atmosphere where our minds are going beyond the reach and let us breathe in the atmosphere of the fairylands and the fairy tales. Hollywood is the best place where you can explore fairytale movies and live in the imagination of the dream world.

Each year Hollywood produces a good number of magical and fantasy movies for all age viewers. Hollywood is the best place where you can have the chance to view the Best Magic movies.

More of us are becoming fond of magical movies. The picture technicalities are developing the movies’ quality. From a very early age of Hollywood is the birthplace of many fantasy movies. These movies are best to make us live in the fairyland and giving us the image of the good old day’s bedtime stories.

The movies like Fantastic Beast and movies like Practical Magic are an all-time favorite among all age people because of their good story, acting, direction, and beautiful animation. These movies are never becoming old, and each time when used to view the movies every time we feel almost the same feelings as the first time watching.

When we discuss the top best magic movies of Hollywood of all time, you will get multiple choice of fantasy movies on the list, but every time, the new movies are always making a long-lasting impact on the movie watcher’s eyes. Here is a list of five top magic movies of all time.

After the 1964 film, Marry Poppins was a big blog bluster over the silver screen. Bob Marshall once again gave the rebirth of this famous magical character in the Mary Poppins Returns movie in 2019. Emily Blunt plays the lead role of Marry Poppins.

The charming nanny is getting back to the services again. This is the all-time best fictional character among the children, but the new film is just moving the movie one step forward.

The movie’s plot is on the basis of the London depression era. At that time, the Banks family was visited by the enigmatic nanny Mary Poppins. Then two magical Nanay is making everyone happy with her unique magical skills. These magics work as aids, and the sad family once again feels the charm of life.

2. Oz the Great and Powerful

The witch and the wizard are part of the fantasy movies. In 2013 the famous director Sam Raimi and the writer David Lindsay-Abaire and Mitchell Kapner were making the bedtime story true in the real world. The movie is based on the L. Frank Baum’s Oz novels. The full movie is based on a strong story, along with perfect animation and a very colorful gesture. James Franco plays the lead role of the wizard.

The story starts from the Kansas ground. There was a frustrated magician who was fake. But after the show, he is transported to a magical land called Oz. In OZ, this fake magician is famous for the prophecy. The prophecy was he will be saving the citizens of the OZ from the wicked witch. If you want to know the real truth behind this fake magician’s winnings, you must see the movie first.

Almost all of us are aware of Jack and the Beans story from our childhood fairytale stories. The director Brian Singer and writer Darren Lamke are making the fairytale breathing in real life. He is making the movie on the basis of this bean story. The attractive animated HD quality pictures are the key factor in making the movie more accepted. among the young and adult.

The story is similar to the original Jack and the story of the bean. Jack is the main character of the movie. He is the son of a farmer. At the end of the story, Jack has to slay the giant and save Princess Isabelle. The bean seeds are given to him by a monk in exchange for the horse sprouts. If you want to know the real result, then you must see the movie and enjoy the full story with the marvelous acting of Nicolas Hoult.

The sorcerer’s Apprentice is one of the best movies about magic and magic. The movie is a little inspired by the 1960 movie fantasia. But apart from that, the magic and the unique modern concept of the movie is just making quite a different impact on the viewer’s eyes. The magician Balthazar’s leading role is played by Nicolas Cage, and Jon Turteltaub directs the movie.

Balthazar Blake is a master sorcerer in Manhattan city. He is trying to defend the city from his enemy Maxim Horvath(another magician). The Balthazar can not save the city alone, so he chooses an apprentice to stand beside him and he recruited a common man named Dave Stutler for being his apprentice. If you want to know the duo’s success story, you must see the movie first.

For the past few years, Hollywood is giving us back to back good fantasy movies. More of them are focused on our bedtime storytelling books. The story’s main characters remain the same, but the story presents added lots of extra tasty ingredients. And Alice in Wonderland is one of these types of movies. Tim Burton directs the movie, and this movie is full of different animation and beautiful picturization with modern story punch.

The base story of the movie is the same as Lewis Carol’s book. Alice is the main lead character of the story. The 19 years old Alice has to travel to another world to save her friends from the red queen. The rabbit is leading the path to the Underland. There he meets many talking animals, and the most important of them is Jabberwocky monster, which she has to slay and restore the throne for the rightful queen.

In this list, many of your favorite movies are not having their place. We are making a list short as we analyze the movies according to the picture, script, and story bases. These all five movies are not only the best, these movies are an all-time favorite among all age people. All magical fantasy movies are the gateway to entering the fairy tale dream world. In many movies, we all are portrayed as the lead character’s role as all of us are the hero of our fairyland.

Joseph Rojas is a freelance content writer and enthusiastic blogger. He is the co-founder of the sports mag. He contributes to many authority blogs such as the pets magazine.

Upcoming Movies to Watch in 2021 on the Internet