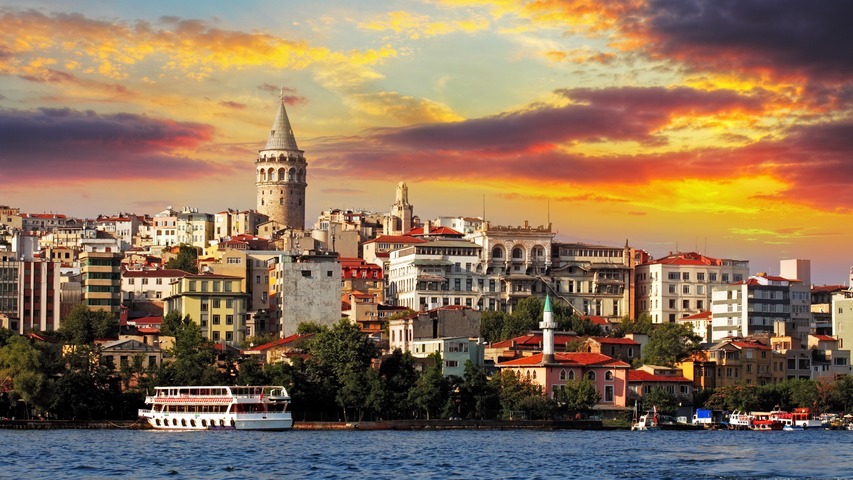 This list of the best places to visit in Istanbul will help you discover the city of a thousand and one nights, without missing anything important. Istanbul city divided into two parts by the Bosphorus Strait, one in Asia and the other in Europe, the city of the seven hills falls in love with the harmonious mix of cultures and lifestyles of East and West, which make it a dream come true for all, travelers who visit it.

Travelers who visit it to know all its tourist attractions and enjoy great experiences, such as listening to the call to prayer or giving yourself a good massage in a Turkish bath, we recommend investing between 3 and 4 days although it is highly recommended to have a few more days to know some of the wonders of Turkey like Cappadocia, Ephesus or Pamukkale.

Keep in mind that the best time to visit Istanbul is in spring and autumn when the weather is most pleasant and temperatures do not reach 40 degrees in summer. Based on the time we spent in this city during our trip to Turkey, from which we wrote this Istanbul guide and this post on tips for traveling to Istanbul, we have made this list of what we believe are the 10 best places to see in Istanbul.

Hagia Sophia, built between the years 532 and 537, on the west bank of the Bosphorus, is the most iconic construction to visit in Istanbul. A masterpiece of Byzantine art, it impresses with its huge dome and its 4 minarets that were added after the Orthodox church was transformed into a Mosque, after the conquest of the city by the Ottoman Empire.

After a few years of being a museum, in 2020 it became a mosque again, so during religious ceremonies, all images such as mosaics and huge medallions are covered. Despite this change, it is worth going inside to see its enormous dimensions and enjoy the views of the Blue Mosque, from the second floor.

A great way to learn about the history of Hagia Sophia and the Blue Mosque is to book this tour in Spanish that includes a cruise on the Bosphorus Strait.

A few meters from Hagia Sophia is the Blue Mosque, built by Sultan Ahmed I at the beginning of the 17th century and considered the most important in Istanbul. Although from the outside it will already attract your attention for its 6 minarets and several small domes culminating in a large central one, it will not be until you enter its interior barefoot that you will be speechless when you see the 21043 Iznik tiles and the 260 windows lined up on five levels, which let in the light and create a unique atmosphere.

Keep in mind that to enter this and the rest of the mosques in the city you must wear appropriate clothing, in the case of women they must cover their hair and shoulders with a handkerchief, while men cannot wear shorts or tank top. In addition to seeing it by day, we recommend that you go to a square between the Blue Mosque and Hagia Sophia at night, to see both illuminated. Another good option is to dine at the Panoramic Restaurant or at the Mesopotamian Terrace Restaurant, two of the best restaurants to eat in Istanbul most recommended, with visits to the Blue Mosque and Hagia Sophia.

Visiting hours: every day from 9 am to 7 pm (closed during worship hours).

3. Topkapi Palace, another of the places to see in Istanbul

The Topkapi Palace forms, together with the Blue Mosque and Hagia Sophia, the triangle of the three most famous places to see in Istanbul. From this large complex of 700,000 m2, in which more than 5,000 people lived, the Ottoman sultans ruled their empire from 1465 to 1853, making it their habitual residence and providing it with the greatest luxuries of the time.

One of the best things to do in Istanbul is to go inside the palace to see the treasure, which houses pieces such as the 88-carat spoon diamond and the Topkapi dagger (the most expensive weapon in the world), as well as access the Harem with more than 400 rooms decorated with tiles in which the Sultan resided with his women and hundreds of slaves. After the view, we advise you to take a leisurely stroll through its immense gardens overlooking the Bosphorus Strait. To learn more about the history of the palace and not miss any details you can book this free tour for free and if you do not want to do any guided tour you can choose to buy this skip-the-line ticket in advance.

Visiting hours: Wednesday to Monday from 9 am to 5 pm from November to March; the rest of the month it closes at 7 pm.

4. Basilica Cistern, one of the places to visit in Istanbul

If you are looking to get away from the hustle and bustle of the city and have a bit of tranquility, nothing better than going down to the Basilica Cistern, built by Emperor Justinian the Great in 532 BC, which is another of the most beautiful places to visit in Istanbul.

This submerged palace supported by 335 imposing 9 meter high columns, was used to supply the Topkapi Palace and other important buildings, in case of water shortage or siege. Among its curiosities are its two columns that are based on a Medusa head and that serve as a stage for music concerts, thanks to its fantastic acoustics. To learn more about the history of the city and not miss anything important, we recommend you book this guided tour in Spanish that passes through the most essential places or this private tour, in which you choose the itinerary.

Near the Basilica Cistern and the Blue Mosque is the Hippodrome of Constantinople, of Roman origin and with several points of interest to consider. Built in 200 AD. As a social and leisure center, in this large space different shows such as the incredible chariot races were held, although at present there are only some remains such as the 32-meter column of Constantine, made in 330 to celebrate the designation of Constantinople as the capital of the new Roman Empire.

Other notable monuments are the serpentine column that symbolizes the victory of the Greek cities in the Medical Wars and an Egyptian Obelisk, which is the oldest monument in the city, with more than 3,500 years.

6. Grand Bazaar, one of the places to see in Istanbul

Any self-respecting traveler cannot leave Istanbul without haggling as if there were no tomorrow for a carpet, a lantern, a jewel, a tea set, or a wooden box of Turkish delight in one of the more than 4,000 shops in the city. Grand Bazaar.

Considered one of the largest and oldest in the world, this market divided by 80 streets is the perfect place to test your bargaining skills and take home a lot of souvenirs for friends and family. A good way to immerse yourself in this market and other points of interest in the center, with the help of a local guide, is by booking this free tour of Istanbul for free! considered one of the best free tours in Istanbul.

7. Cruise on the Bosphorus

One of the best experiences you can have in Istanbul is to enjoy a romantic sunset cruise on the Bosphorus Strait, which separates Europe from Asia. These boats that usually leave from the Kabatas dock, located in the port, allow you to enjoy privileged views of both banks of the strait where monuments such as the Maiden’s Tower, the Dolmabahce Palace, and the Mosque of Ortaköy, while the sky turns orange.

Among the tours most valued by travelers is this Bosphorus sunset cruise, this one that takes place during the day, or this one that includes dinner.

If you had to visit a museum in Istanbul, we would recommend the Archaeological Museum, located next to the Topkapi Palace and with one of the most important collections in the world. Among numerous pieces of the Ottoman Empire and nearby kingdoms, those of the Babylonian Gate of Ishtar stands out and above all, the sarcophagi of the tombs of the kings of Sidan considered the greatest discoveries of the IXX century, which has in the Sarcophagus of Alexander of the century IV and that of Meleager, its great treasures.

Visiting hours: Tuesday to Sunday from 9 am to 5 pm.

9. Suleiman Mosque, another of the places to visit in Istanbul

The Mosque of the powerful Sultan Suleiman the Magnificent, built between 1520 and 1566, is one of the essential places to visit in Istanbul. This huge temple, which rivaled the Hagia Sophia in size, impresses with an exterior with a huge central dome 27 meters in diameter surrounded by smaller ones and 4 tall minarets, while inside Iznik tiles shine in the light that It goes through its large windows and its large lamps, in addition to the space occupied by the mimbar and mihrab, made of white marble.

When leaving, it is worth going to the garden to see the tomb of Suleiman the Magnificent, that of his wife Roxelana, and Sinan, the architect who made this masterpiece.

The Spice Bazaar or Egyptian Bazaar is another of the best markets to see in Istanbul thanks to its many varied stalls selling spices, typical sweets, and nuts. Located very close to the Galata Bridge and shaped like an L, this old-covered market is perfect to test your senses thanks to the diversity of colors, smells, and flavors that are concentrated in this small space.

In addition to buying spices of all kinds and trying sweets, before buying them, it is a good place to buy herbal teas and Turkish coffee, as well as perfumes and oils.

If you have more days in the city, we suggest you get to know some of the wonders to visit in Turkey by doing some of the excursions best valued by travelers visiting the country. It is a relatively cheap city and it is true that there are many places and attractions where you must pay for your entrance. But always, as everywhere, there are little things that you can do totally free and that will make you feel part of the city. Also, visit Umair Khan Life Journey Turkey Vlog Series to experience it.

What Are The Interesting App Ideas For Trip Planning in 2022?